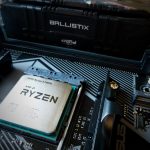 … I got up to this Bank Holiday weekend.

Well, we did our bit for the economy, by Eating Out To Help Out and then spending a further couple of hundred quid on footwear – new walking boots for Amelia and myself and then a stupid amount of money spent on new sandals (yes, the old faithful’s have had to be replaced: still plenty of years left in them, but sadly, our trip to Cornwall left my increasingly debilitating feet crying out for something more comfortable and so I have finally given in to the family’s wishes).

But, I aided the economy further still – well, I added to the lining of Jeff Bezoz’ pockets – by doing a complete PC rebuild.

Having been rock solid for years, Deep Thought 7 started playing up a little while back… I even dismissed the occasional Blue Screen Of Death as a minor inconvenience: “It’ll sort itself out”.

But, it didn’t, and once it started happening more often, it became evident that something needed to be done.

And so, I spent several hours updating all my drivers: far too many were out of date.

All that seemed to do, was aggravate it and prompt further and more frequent BSODs.

And then it failed completely; refusing to boot up at all, or allow me to reinstall Windows.

I initially diagnosed the SSD hard drive as the culprit, but a new one (my word, haven’t they dropped in price?) proved me wrong.

Several runs of MemTest86 declared the RAM to all be in order, so that left the motherboard or the processor.

So, time for a complete upgrade, methinks (any excuse).

Three hundred quid later, I have a nice new machine, that seems to run a lot cooler than the old one and is almost silent in operation.

And she’s fast.    Eighteen seconds from pressing the power button to Windows loading and waiting for me to enter my PIN number. 18 seconds!

OK, I know that will slow down quite a bit, once I add the four external USB hard drives; the NAS; the printers; the SDR radio, and the HF radio (Oh god: I’ve got the nightmare of getting all that working again!), but right now, I’m absolutely loving my new toy.

Family, Geekerama, Going out, Me me me