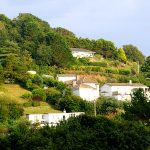 By rights – and but for this damned coronavirus lark – we should have been on a cruise ship this week, sailing around the Caribbean. But of course, that all got cancelled and has had to be rescheduled for next year.

But the current Mrs M will be damned if she goes without a holiday of some sorts, and so we have just spent the past week in deepest, darkest Cornwall.

Near Looe, to be more exact.

And very nice it was too. Very picturesque and quaint (above is the view from our chalet balcony).

We even took the dog with us. That was a first.

It took her a couple of days to settle in, but I think she enjoyed it – some different woods to explore and it was also the first time she’d seen the sea: a little cautious at first, but then she took to it like a dog to water.

Having the dog, was a good excuse to do a lot of walking – the weather being much kinder to us down there than it was at home, by all accounts.  And we were surprised at how many places welcomed dogs – we were even allowed to take her into some shops… shopping: another first for her. 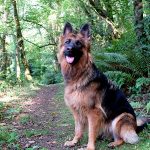 With hills all around us and the open sea in front, we had absolutely no phone signal at all – which was both liberating and concerning at the same time.  Taking Saber through the woods, I realised that it had been a long time since I had been totally incommunicado and, as we wandered through the woods, I did wonder as to what would happen should I slip, fall and break a leg or something. We would have to wait for a passing rambler or dog walker – in the several visits that we took to the woods though, I never met another soul.

Thankfully, our chalet had it’s own WiFi connection, allowing us to get emails and check on the goings-on of the outside world. However, it was only a paltry 2MB connection and it would frequently go off – much to the kids’ annoyance.

No phone signal. No Internet. It was like living in a Third World Country! 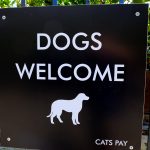 On Thursday evening Mrs M and I locked the kids in a cupboard and went out to a restaurant, to meet some friends of ours who we hadn’t seen for over 17 years.  Apart from the pea-souper that made the drive back to Looe a little scary, we had a most enjoyable evening.

But, all too soon it was time to come home. On a Friday.

Nine hours, it took us. Nine fucking hours!  It was a horrendous journey.

The motorways were all coloured in red, discouraging us from going that way and so – against my better judgement – we found ourselves on the A303 going past Stonehenge. 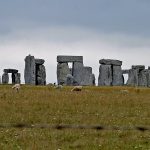 I took a picture, because there wasn’t much else I could do (I hasten to add that Mrs M was doing the driving)

Eventually we got home, absolutely knackered from our journey – the dog handled it surprisingly well.

The weather here is shite, but the broadband is excellent 🙂