Getting one’s affairs in order 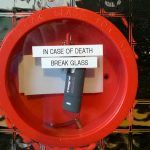 Last year, whilst the current Mrs Masher and I were out walking the mutt one day, Mrs M suddenly said – apropos of nothing – “We must get our wills updated.”

I agreed. We had made a will together shortly after we got married and so much has changed since then – (kids mainly, but other stuff too) – that I realised our will would be woefully out of date and was no longer what we wanted.

We agreed to sort it out… but haven’t yet done so.

“Also”, she said, “if you suddenly snuff it, I’ve got no idea about your bank accounts. You need to write the details down, so I’ll know.”

Again, this is true: we both keep separate bank accounts (always have done). It works for us.  But, I have half a dozen different accounts that I use for paying bills and for savings and things.  If I were to drop dead tomorrow, she would need immediate access to those accounts, in order to keep the debtors from the door.

I agreed to sort that out too. But, how to do it? I certainly didn’t like the idea of writing everything down – account numbers, passwords, security questions, etc – and putting it in a brown envelope in the filing box, as per Mrs M’s suggestion. Far too risky. What if we got burgled whilst away on holiday?

What you see in the picture above, is the solution I came up with. Inside that red key box, is a memory stick. It contains EVERYTHING. All my accounts, with login details and passwords, but also a written description as to what I use each account for.

There are also written instructions on what to do with all my stuff, if I unexpectedly shuffle off.  I’ve got a lot of gear and have already made some verbal arrangements with friends, but these instructions should help her to dispose of some – or all – of my ‘crap’.

There are also some detailed instructions for the funeral, including the mp3 files of the music I’d like played.

And contact phone numbers of various friends etc that I’d want to be alerted to – what would surely be – the terribly sad news of my demise.

But – I hear you cry – a memory stick! That’s not very secure!

Well, there are three levels of protection here:

I feel confident that this is secure enough for me to hold such information on.  Plus, it’s dead easy for me to update, as and when I need to.

Now all I need to do, is get round to sorting the will out, then a copy of that can go on there too.