Too Much Cotton Wool 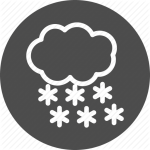 Unless you’ve just had a fortnight’s holiday at Ice Station Zebra, you can’t fail to notice that we’ve had our first dumping of snow.

But it does look pretty when it’s been freshly laid (there’s a joke in there, somewhere).

I took the mutt out for her morning walk yesterday, dark and early.

She loves the snow!

And, much as I hate the damn stuff, I do always get a frisson of excitement when it’s my boots that are making the first prints in the virgin snow; the whump whump as I trudge through it all is quite satisfying. I’ll often turn back, just to see the trail I’ve made, meandering off into the distance, before it gets churned into a mess by a hundred other pairs of boots.

A little later, the wife went off on her merry way to work: a five-mile journey that caused her no problems at all.

I then spoke to a friend on the radio, who travels up from London on a daily basis. His commute was also free and easy.

And then, whilst I had my breakfast, I noticed the dustman making their way up the road… at exactly the same time as they usually do. No delays.

Y’see, we’d had plenty of warning and the council had sent the gritter lorries out in preparation. The roads were absolutely fine, such that no-one should have any problem getting to work.

Why oh why, then, was every single High School in the town closed?

“Duty of care” and “Health & Safety” reasons, is what we were told.

It was possible a child could slip over in the snow and hurt themselves.

You know: just like we did, when we were growing up.

Family, Me me me, Rants