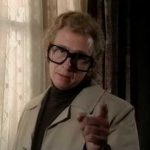 It’s three o’clock in the morning, as I type this.

Yes, three of the clock!

You might think this is blogathon dedication, but no.

I have been awoken from my slumber by two things:

The first was easily rectified, but the second  really annoyed me, because it went on for ages… and I couldn’t see it.

I opened the bedroom curtains just enough to peek through, but couldn’t see anybody.

I craned my neck to look as far down the road as I could, and then the other way, as far as I could up the road.

But, frustratingly, whilst I could hear the arguing, I couldn’t see who it was.

In fact, the only thing I could see, was the bedroom curtains twitching at the house across the road.  I think they had a much better view.

I’ll readily admit to being a nosey neighbour… if something is going on in our road, I want to know about it.

I mean, everyone likes a bit of gossip, don’t they?

But, disappointingly,  I have none; I have nothing to show for having been awake for the past hour.

I know one of my neighbours was arguing, but I don’t know who it was.

Or what it was about.

But I bet them over the road, do.

I just might have to pop over for a cup of tea, later 🙂