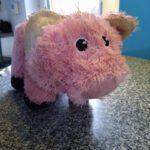 Piggy is currently Saber’s favourite toy to play with.

Piggy was a Christmas present and has lasted surprisingly well, considering the bashing it takes.

It used to have a squeaker… that was supposed to sound like a piggy grunting noise. It sounded more like a piggy farting noise.  Annoying as it was, it was less intrusive than the high pitched squeak from some of her other toys.

I say “was” because, despite Piggy still being physically intact, Saber has managed to destroy the squeaker inside.

But, it’s not her most favourite. 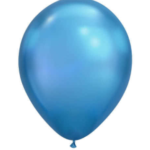 OMG! Following Harry’s birthday party last month, we discovered that the dog has a real liking for balloons.

If you bring one into the living room, she will go absolutely bonkers, wanting to play with it. And so, we stand in a circle and bat it to each other, whilst the dog stands in the middle and jumps up at it.

She is obviously trying to bite it, but cannot get her mouth around it.

It’s hilarious to watch her jumping up and snapping at it.  Eventually though she will catch it, and always looks bemused as it suddenly disappears.

Five minutes of that and she’s knackered. 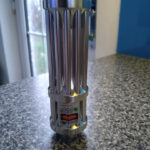 But, her most favourite toy by far, is the laser pen.

We have gone through many cheap ones over the years, so Mrs M splashed out on this heavier duty, industrial-looking model.

It’s very bright, compared to the el cheapo ones.

I love taking her over the park of an evening when it is just getting dark, and I’ll just run the pen round on the ground in a large figure of eight, stretching about fifty or sixty meters, and she’ll chase it until she is exhausted.

And then she’ll chase it some more.

I’ve had several people stand and watch, amazed as she runs around, chasing a bright green dot of light on the grass.

Sometimes, if there is still a good amount of daylight,  people can’t see the dot of light and are really amazed to see the dog running in a large figure of eight, as I just point to where she should be going.

Last week, a lady filmed us on her phone!

But, being so obsessed with it, as she is, it also acts as a handy recall device. As soon as I take it out of my pocket, she is at my side, tail wagging, excited and completely oblivious to other dogs, joggers and cyclists.  Very handy.  And if she suddenly runs off and chases a deer or something in the woods, I can fire the laser just in front of her and it distracts her from the chase, immediately.

But those times when I get it out of my pocket and she runs up to me excitedly, and then I find the battery has run out… those are pretty sad for both of us.

Family, Me me me, People