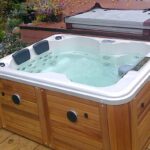 As I was walking past a neighbour’s house a few weeks ago (not an immediate neighbour, but just around the corner: there’s a path that runs along the back of the houses), they were out cutting down some large bushes that were overhanging their 6-foot high wall.  And with the bushes gone, I could see that they had built a lean-to in the garden – I could just see it’s roof above the wall.

Having not seen them in a long time, I stopped and chatted for a few minutes. Karen explained that she had come into some money and so had decided to splash out on a hot tub.

If I came into some money, I don’t think buying a hot tub would be uppermost in my mind.

But, each to their own.

Saturday evening, whilst walking the dog along the same path, I passed their back garden and I could hear bubbling water and the sound of Marvin Gaye sitting on the dock of a bay. Karen and Ian were quietly talking.

“Each to their own”, I thought, as I zipped my coat up tighter against the chill wind that was blowing.

Then yesterday evening, when the temperature was literally freezing outside, I again heard them, laughing and talking in the tub, as I walked past.

This time though, there were three voices: one female and two male.

“Each to their own”, I thought, raising an eyebrow as I did so.

I’ve been in hot tubs when we have been away on holiday and can’t say I have ever really enjoyed it.  I’m generally bored after about five minutes.

At home, Me me me, People