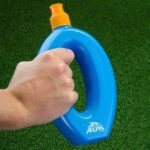 There’s a fatbloke that I see at the weekends sometimes, when I’m walking the dog.

I would say he is in his mid to late thirties – it’s difficult to say, because of his size.

He really is a big, overweight, chap and I’ve seen him several times – such as I did this morning – when he goes out exercising.  He is obviously trying to lose some weight and full kudos to him for that.

There is a short path of 50 metres or so, that cuts across the meadow and I see him jogging along that path. He slowly jogs from one end to the other, then he turns round and walks back. Then he jogs down the path again, and walks back again.  I don’t know how many times he does this. To me, it doesn’t seem the most vigorous of exercise, but as I say, he is out there trying and I applaud him for that.

The bit I find strange – nay, amusing – is that he carries a water bottle with him – as pretty much all joggers and runners do, nowadays (they never used to in my day).

Now, I know that hydration is important but, does he really need to carry a water bottle… when he only lives two doors away from the path he is exercising on?