To educate or not to educate, that is the question 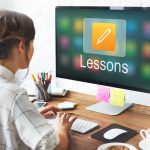 This Covid lockdown business is having a detrimental effect on our children’s education, as I’m sure everyone is aware.

My son is in his final year at high school – the year in which he was supposed to be taking his GCSEs, but who knows what’s going to happen there?  One thing for sure, is that he has missed a lot of proper schooling. Even when they went back to school – between the lockdowns – he was only there for a short period, as someone in his year (a teacher) tested positive and the whole year had to be sent home to self-isolate.  This happened twice in the same month!

The school – like others – started doing online lessons, but it was all very haphazard at first.  I think they have improved now though and seem to have a more rigid online curriculum in place. Even so, Harry tells me that they have a lot of supply teachers and that they are mainly doing just revision.  Possibly, at the end of the year they will be assessed on what they have learnt so far.

Maths has always been a strong point for him, but when we got him to take a mock GCSE exam before Christmas, he failed.  We were told that on the stuff that he knew, he was actually very good, but that there were large gaps in his learning… obviously.  As such, we are now paying for him to see a private maths tutor once a week. Whether this will help in any exam he may or may not have at the end of the school year, I don’t know, but it can’t do any harm and – like any parent – I want to give him the best start for when he leaves school. I just wish I could afford to also get private tutors for English, Geography, Engineering and Science.

Following his maths tutelage, I was discussing his other lessons with him last night and he told me how, for his science homework, he has to write up why a thick electrical  wire has greater resistance than a thin wire.

Of course, I told him that he had it the wrong way round, but he showed me in his book where he had written down verbatim what the teacher was saying in the lesson.
She had said “A thick wire has a greater resistance than a thin wire, because there are more particles to get in the way of the electric current”.

I have written to the school headmistress, asking her to have a word with said science teacher, but it does worry me, if that is the calibre of some of these supply teachers.