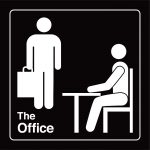 The very first time I saw The Office, on BBC2, I watched it for about 60 seconds and then dismissed it as a documentary that I wasn’t really interested in.

The next time, was when I was working nights up in Glasgow and needed something to entertain me during the day. One of my work colleagues brought in the boxset for me to watch.

Just two episodes in and I was hooked.  I think I watched both series in just a couple of days.

The brilliance of the writing and the low-key acting of the cast, was like nothing I’d seen before.

I knew that an American version had been made – seen it in the Netflix EPG – but never got round to bothering with it.  American remakes of British shows have never been as good as the original, in my opinion.

However, I was looking for a new boxset and it was recommended to me to watch. Annoyingly, just as I decided it was time to give it a go, Netflix removed it. D’oh!

And I’ve now nearly finished the second series (there are nine seasons of the American version).

So, how does it compare with the original?

Don’t get me wrong: I like it and I’ll definitely watch all 9 seasons, but for me, it doesn’t have that mockumentary realism that the original had – so real, it fooled me, first time round! Although the American version follows its British counterpart pretty faithfully (so far) and is filmed in a mockumentary style, to me it feels more like a sitcom. The characters are that bit more outlandish (especially the manager Michael Scott-  played by the brilliant Steve Carrel – and his assistant Dwight, but maybe that is what is needed for it to be a success in America… there’s no doubt that there is a mildly different sense of humour on each side of the Atlantic.

Steve Carrel’s character makes me laugh, whereas Gervais’ makes me laugh and cringe and it’s it’s that British cringiness  – that Basil Fawlty also did so well – that clinches it for me.

But I’d be interested to hear your thoughts… if you have any.