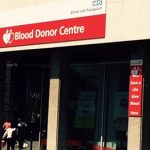 Remember it distinctly, as several of my work colleagues were going because it gave them the afternoon off work, effectively.

I’d not given before and was pretty nervous, but a pretty, young, red-headed nurse held my hand throughout.  I went many times after that, but sadly never met Red again.

And then a permanent donor centre set up in the town, making it really easy to attend.

After a while, they asked if I could donate platelets, as opposed to whole blood… something to do with me having a ‘good yield’, or whatever. And so I switched to platelets, allowing me to donate quite frequently.  It wasn’t long before I was on first name terms with most of the staff there.  And I even ended up dating one of the doctors for a (very) short period.

And- of course – it also wasn’t long before I started getting awards for the large amount of donations I had made… culminating in a very swish affair down in Covent Garrden, where I was presented with a crystal goblet for donating a stupid amount.  That goblet takes pride of place in a cardboard box, somewhere up in the loft.

But circumstances change and suddenly I found myself having less time to attend.

On top of that, the skin tissue on my left arm started to exhibit bad scarring from having had so many needles pushed into the vein – I looked a bit like a junkie!  And also, the vein itself was starting to cause me grief – giving me pain whilst the needle was in there.

And so I cut back.

I reverted back to giving whole blood, just five times a year.

But with time still being a major constraint for me, that slowly dwindled.  I now give only once or twice a year.

And I feel bad about it. I feel bad because I feel I should be doing more. I know that it is a service that is reliant on volunteers and – as a volunteer – I don’t think I’m doing enough anymore.

The Blood Donor people are forever contacting me to try and persuade me to donate. I receive letters from them (several a month) and text messages.

And they call me. On the phone.  I recognise their number now and I’ve taken to not answering it, when they ring, because even though they ask ever-so-politely, I feel pressured into donating. I decline their call, and I feel bad about it.

Why? Why should I feel bad?  I’ve given over 34 gallons of blood and platelets over the years, so why do I feel guilty about “not doing my bit”?