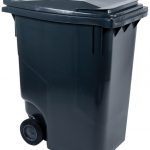 Toward the end of last year, the local council announced that they would be reducing the bin collections.

Our black bin – the one for general waste – would now only be collected fortnightly.

This – they said – was in an effort to encourage people to recycle more.  This thinly-veiled excuse was obviously to try and cover up that they just needed to cut back on collections, to save money.

Our green recycle bin is only collected fortnightly, as it is, and is usually chock-full by the time they come to collect it, so how we are supposed to get more in there, I don’t know.

And now the black bin is just as full. More-so, actually.

The only reason the lid shuts on it (well, nearly shuts), is because I have to climb into the damn thing on a weekly basis and jump on all the rubbish to compact it all down.  I just know that one day, a bin-bag will burst and I’ll get a slipper full of old tea bags and baked beans and shit!

And the glass bin is only collected once a month.  Each Friday, I find myself wondering which bin it is that has to go out… I have no idea! I usually end up peering across the road to see what the neighbours have put out.

It’s all a bit rubbish, really.

Me me me, Rants