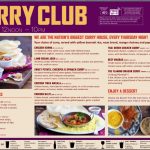 I was out on the slosh, last night, so my head is a little woozy this morning.

It was the regular monthly get-together of the BT (Class of the Eighties) Curry Night, at our local Weatherspoons.

Always a good night, but I never make it every month. By the time I get home from work, I usually just can’t be bothered to go out again. But, as I have a couple of days off this week – just using up my annual leave allocation – I had no excuses.

And last night, in addition to the regulars, we had a couple of new faces… well, new old faces.

Firstly, there was Wobber. I don’t know why we call him that, as his name is Roger, but he’s been called Wobber for as long as I can remember (most of the engineers at BT answered to a nickname – including myself, which is where the moniker for this website comes from). This was the first time I’d seen Wobber since 1994 and – unusually for me – I recognised him straight away… despite him having lost all of his hair and now bearing a remarkable resemblance to Wilson Fisk.

And then there was Ralph. Again, first time I’d seen him since I left in ’94. I never used to mix it with Ralph as he was a bit older than me and was always one of the cool kids. But I’ve always held him in high regard, not least because I fell off my motorbike on the way to Bletchley Park for a training course, early one cold and slippery November morning, and I met Ralph (a fellow – and far more experienced – motorcyclist) in the motorcycle parking bay. My bike was pretty bent up, but during his lunch-break, he straightened it out for me, enough that I could ride it home. I’ve always been grateful for that.

There were about a dozen of us there last night, but only four still worked for BT.

The fact that we still get together so regularly, amazes me, but also pleases me greatly.