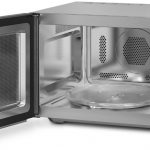 Our microwave oven died on us yesterday, so when I went up to do the weekly grocery shop, I had a look to see if that had anything decent to replace it with.

And they did. A Sharp one that ticked all the boxes and was reduced in price from 80, down to 55, down to 48 quid. “I’ll have some of that”, I thought and put it in my trolley.

I just happened to be near the DVD section and Mrs M had asked me to keep an eye out for the Marvel film, Venom, as we had missed it at the pictures. I never found it, but three others ended up in the trolley: 2001: A Space Odyssey (a classic); Amadeus (one of my all-time favourites) and the Bladerunner sequel (I’ve just finished re-reading the first one, so it was a serendipitous find).

I decided I would buy this lot first and then come back for the food shop, as there wasn’t much room in the trolley.

I found an empty till (unusual) and heaved the microwave onto the conveyor belt, along with the DVDs. The young chap  – Colin, according to the badge pinned to his jacket – scanned it all in and gave me a price.  “No, no, no”, I said, that’s wrong.

“Let me stop you there. The microwave is forty-eight pounds.”

He re-scanned it: “Well, it comes up as fifty-five.”

“Maybe it does, but it said it was marked down to forty-eight, on the shelf.”

He held his hand in the air and another young chap – Nathan – came over. Colin explained the problem.

By now, a bit of a queue had formed and so Nathan suggested that Colin should just put through the DVDs and he would sort out the microwave price issue. With that, he picked up the box and – staggering under the weight – carried it back over to the kitchen section.

I turned back to Colin, who was stabbing his fingers all over the touchscreen and was looking confused. “Is there a problem?”, I asked.

“It won’t let me remove the microwave.”

There was an audible sigh from the queue and I could feel their eyes burning into me, because this was all my fault, obviously.

Colin held up his hand to try and attract a supervisor. I held mine up too, in the hope it might help. Everyone in the queue looked around for a supervisor, but there wasn’t one to be seen anywhere.

“Sorry about this”, Colin said to me.

“Sorry about this”, I said the queue behind me. The old boy directly behind me gave a pained grimace and looked down sadly at his pint of milk… the only thing he’d come in to buy. By rights, he should have been and gone by now.

Eventually, a supervisor responded to Colin’s frantic waving. She tapped on the screen a few times with her magic fingers and suddenly I was able to pay for the DVD’s.

At which point Nathan returned. “It’s forty-eight pounds”, he said.

He looked at the queue behind me and seeing that I had just finished up, he said “Come with me and I’ll put it through a different till”. The relief from the queue was palpable.

Thinking this was an open cashier, an old woman pulled in with her trolley and started putting her stuff on the conveyor.

She scowled at him and took the stuff off the conveyor and back into the trolley.

Nathan went back to puzzling over how he was going to sell me this microwave oven at the correct price.

Another old lady, spotting the empty conveyor belt, rushed over and started to empty her trolley on to it. “Sorry”, said Nathan, turning towards her, “I’m not open.”

“It doesn’t say that it’s closed”, said the old lady.

“I only opened it for this gentleman”, said Nathan, nodding his head in my direction.

She looked at me with distaste, as she put her groceries back in the trolley. “Who are you then, the bloody king of Sainsbury’s?” she harrumphed, and then she waddled off to try and find a till without a humongous queue.

Nathan finally figured out how to re-price the microwave and I quickly paid and headed out the door.

It must have taken about twenty minutes to buy this one item and  in doing so I was made to feel guilty for causing such a long hold up.  And on top of that, I was pilloried by an old lady.

My final ignominy was when the alarm sounded as I went out the door, because the box still had the alarm tag thing on it.

Fortunately, the alarm wasn’t loud enough to wake the security guard from his slumber.