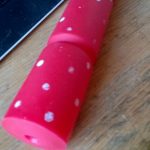 Saber is very good at chewing her toys to destruction.

It’s what she does.

Whatever she gets, she will chew and chew and bite and bite, until it eventually falls apart. This usually happens within several hours to a few days, but has been known – depending on the hardness of the toy – to be as little as just a few minutes.

A lot of the toys contain a squeaker, and I think perhaps the noise is what drives her to destroy it… maybe she believes she is killing some small animal, I don’t know, but either way it’s a blessed relief once the squeaker dies or falls out.

But, the toy in the picture is a rubber Christmas cracker.

And the damn thing is bloody indestructible! She’s had it for weeks now (it was a Christmas present) and it still shows no sign of giving up.

She looks both upset and bemused, when I take it away from her – as I often do – because we can’t hear the telly over the noise of this damn thing squeaking out its defiance.

Next year, she can have a real mouse or a guinea pig… one or two squeaks and then it’ll be silent!