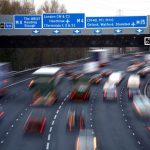 As our Cilla used to paraphrase.

Well, I made it to the conference yesterday.

I left even earlier, just to be on the safe side. However, when I reached the slip road for the M1, there was a big tailback, thanks to four vehicles having a shunt, right at the top of the slip road.

“I don’t belieeeeve it!”, I shouted, turning into Richard Wilson from One Foot In The Grave.

But, once I’d got past it, my journey was OK… I just didn’t arrive quite as early as I’d hoped.

And getting out of Newbury Racecourse was horrendous! Imagine trying to get out of Wembley Arena after a Take That concert, and you won’t be far wrong.

And then the M4 did what the M4 does best – it snarled up.

It was nearly eight pm when I got home.

And today, I have to be in Dartford, bright and early for an 8am meeting.

With the luck I’ve been having on the motorways this week, I really haven’t got a chance!