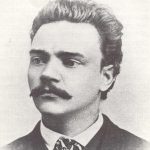 Occasionally, as I have mentioned here before, I will get a tune stuck in my head.  An earworm, as some people call it.

This has happened again.

For a whole week – and even as I type – I have had Antonin Dvorak’s 9th Symphony stuck between my ears.

Not ALL of it, of course, because it’s a bit lengthy, but bits of it.

Bits out of ALL 4 movements.

Now, I’m not averse to a bit of Dvorak and I’m sure that many would agree that his ninth symphony is well worth listening to.

But, it’s been a week now, so it is starting to grate a little.

And it doesn’t help that when my brain decides that it wants to listen to the 2nd movement, it also puts on a strong Yorkshire accent and adds the words “Eee, he were a great baker, our Grandad”.

Me me me, Rants