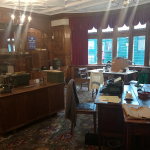 This morning, I visited the National Radio Centre in Bletchley Park.

It was this: most excellent!

By chance, I’d happened to pick a day when an event to celebrate the breaking of the Enigma code was taking place.

An Amateur Radio station in Italy, was broadcasting messages in Morse code, that had been encrypted with the Enigma cipher and various stations around the world were trying to pick up these signals and decrypt them.   I – along with many others – watched with interest as the amateur radio operators received and decoded the Morse code, writing the 5-character blocks onto a replica form to that which was used in Bletchley Park during WW2.

This was then handed to another chap, who was giving a superb presentation on the workings of a genuine Enigma machine that sat on a table before him. His audience was enthralled as he decoded the message letter by letter.

Afterwards, I took a quick walk around the mansion house. It had changed a lot since I last visited it back in the eighties, when I worked for BT. Back then, we used it mainly for recreation, as I remember, but it has now been restored to it’s former glory.  The picture above shows one of the downstairs rooms which – when we used to go there and if memory serves me correctly – housed a pool table. It now – as you can see – gives an accurate depiction of what it would have looked like in the 1940s.

All too soon, my time ran out and I had to leave.

But I’ll go back again soon.

PS – still got that damned tune in my head!