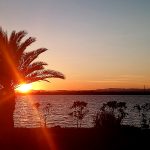 Not that you’d know I’d been away.

I’ve been down to the South of France to spend a week with the family. They are all still down there and won’t be home till the weekend.

But I am now back at home… scratching my mosquito bites.

How was your holiday, I hear you ask?

Well, it was OK. A bit too hot, maybe, but I kept out of the sun as much as I could.

To be honest, I was getting a bit bored after a while.

Fortunately, we had a hire car, so we went out a few times. The picture above was taken on my phone, as we walked back to the car, after a hard day’s Geocaching.

My flights on SleazyJet were uneventful, save for the delays. But I was pleased to see that we had a pilot with a sense of humour on the flight home last night:

I had a window seat on the left-hand side and it was indeed a fantastic view. Being nighttime though, I didn’t recognise any of it.

Upon landing, I was disappointed to find that the free shuttle-bus to the train station, now costs £2.30.

I was annoyed even further when, having purchased my train ticket, I found that the gates were open at either end and I could have ridden for free.

And the final twenty-minute walk home from the station stretched to nearly double that, because my carry-on bag weighed more than twice as much as it had when I originally packed it – carrying most of Mrs M’s clothes as well, due to her needing to make space in her suitcase for all the extra stuff she’d bought out there.

But anyway, I’m back now and the dog is pleased to see me and the temperature is more comfortable and the bed… well, there’s nothing like your own bed, is there?

Now, where did I put that bite cream…?

Family, Going out, Me me me, People