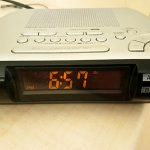 This is our alarm clock. It’s probably about 15 years old or more, but still going strong.

The good thing about it, is that it has two alarms: one for me and one for the current Mrs Masher.

The first alarm is mine and goes off at 5am, with a very annoying Beep Beep, Beep Beep… If I’m not awake before it goes off – which I usually am – then I tend to wake as soon as that first Beep Beep, goes off. No snoozing: straight up and out of bed.

The second alarm is for Mrs M. It’s the local radio station and it’s pretty loud. She will sleep through the first five minutes of it and then doze for another five before finally dragging herself out of bed.

Unbelievably though, I’ve known her to sleep right through it before now.