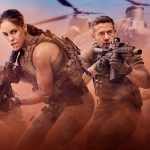 I’m watching an action series on Sky at the moment, called Strike Back. It’s based on the books written by ex-SAS soldier, Chris Ryan. The books – in turn – are based upon his own exploits.

Obviously, with anything like this, there is always a bit of ‘poetic licence’ thrown in to spice it up a bit. Especially when it is “based” upon real events.

I don’t really have a problem with this: it’d be pretty dull watching, otherwise. Because a soldiers life is dull… on the whole. Much of it is spent cleaning boots.

But there is one thing in this sort of programme that often annoys me; something that they always give a little too much poetic licence to. And it’s not just in Strike Back… they all do it!

They all make the bad guys out to be really bad shots.

Bad guys – and I suppose I’m talking about the henchmen here – nearly always have machine guns, And yet, they still miss!

When you are spraying bullets out of an automatic weapon, at one man running across an office floor, it is incredibly difficult to miss him and yet still shoot every single pane of glass and piece of office equipment around him to smithereens.

And, have you noticed how, if the good guy is running across a field or a beach, the bad guy will seemingly aim their machine gun just behind him, at his feet; missing him completely but throwing up puffs of dirt or sand six inches from his heels as he runs, until he eventually reaches some cover.

And Bad Guy Bullets™ won’t penetrate a car door or an upturned table that is protecting the good guy. Even though they mostly would in real life.

Good guys – of course – are much better shots and can generally kill or disable their much-more-heavily-armed-foe, with cunning and guile… and the very last bullet in the magazine of their Glock 19.

If I were a henchman and they gave me a machine gun, I’d know it was time to look for a new job.