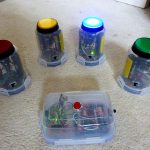 In readiness for the Christmas Quiz – which we have every year at the big family get-together – I wanted some Quiz Buzzers, to stop the arguments over who shouted first.

The ones I used last year – which I built many years ago, from a circuit in one of the electronics magazines – worked well, but there were too many wires spread across the tables and chairs,  between the push buttons and the control unit.  A Health & Safety nightmare!

And so this year, I looked around for a wireless version. They are bloody expensive to buy (300 quid and up, from what I could see), so a homebrew version would have to be the order of the day.

After a bit of searching on the internets, I found a wonderfully simple Arduino design from a German chap called Felix. I say ‘simple’ but of course, all the cleverness is in the software.

His design only allowed for two buttons though and I wanted four.  I thought that I would be able to figure out how to add more, from his code, but my coding skills are rubbish and I couldn’t make head nor tail of it… it might as well have been in Greek!  So, I dropped him a line asking if he would be so kind as to amend his code to allow for more buzzers. 24 hours later, he’d done so. Splendid fellow!

I then added a little bit of simple code of my own, to allow the Master control unit to give an audio alert when any button had been pressed, as I found in testing that it was quite easy for a player to lock the other players out, by pressing his button and then just keeping it covered with his hand, so no-one could see (Harry, you little cheat!).

I won’t go into the circuit here, or the code, as that can all be downloaded from Felix’s GitHub Repository.  But, if you plan on building one, I’m happy to supply my extra bit of code for the audio alert – which I feel is a definite requirement.

The Arduino Nano boards were sourced from ebay, along with the NRF24L01 radio modules for a very reasonable price. The big buttons are 60mm ones from Arcade World and are very good quality. The Tupperware came from Sainsbury’s.  🙂

I’m pleased to say it all works wonderfully.

I just need to put a quiz together now!