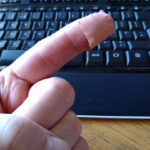 Or… “My ongoing attempts to make my wife laugh at my smutty innuendos.”

I was just doing the finishing touches to the bedroom yesterday afternoon: fitting the door handle back on; fixing that faulty LED on the bedside alarm clock; fitting new light switches and plug sockets… that sort of thing.

I turned the power off whilst I changed the plug sockets, which meant that the family were in turmoil, as there was no Wi-Fi for ten minutes.

I was rushing to fit the last socket and the screws were in a small plastic bag, which I opened rather hastily with my penknife. The knife went easily through the plastic and sliced cleanly into my fingertip.

There was quite a lot of blood, quite quickly.

Cradling my finger I went downstairs and stuck it under the kitchen tap.

One of the kids came in and looked at the red water pooling in the sink. “What have you done?”

“No, with a tennis racquet.”

There was a short pause as my sarcasm registered: “Oh.  Is the Wi-Fi back on?”

I glared at her and she left the kitchen, just as Mrs M walked in. “What have you done?” she asked, staring at the water which was still running red.

“He cut it with a tennis racquet”, Amelia shouted back from the living room.

She stared hard at me for a second and then…

“I’ll need to close that wound with some Sellotape…”

One day I’ll manage to at least get a giggle out of her, I swear it!