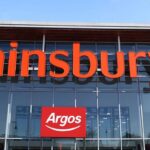 Doing my weekly shop in Sainsbury’s today, I was idly pushing my trolley up the fruit and veg aisle, checking out the satsumas as I did so, when a bloke walked past me, pushing his own trolley.  I was a bit annoyed, as – despite there being plenty of room – he came very close to me… definitely invading my 2-metre exclusion zone.

I looked back at him as he trundled off in the other direction and there was something familiar about him: his shuffling gait and the baggy clothes he was wearing.  “Was that Gerry?” I wondered.

I didn’t worry about it, reasoning that whoever it was, there was a very good chance I’d bump into him again in the next aisle.

Five minutes later, just as I finished loading my coolbag with several different types of yoghurt, I saw him heading toward me.

I looked carefully: was it Gerry?

It was difficult to tell: he was wearing a baseball cap and a surgical mask, so as far as facial features went, all I had to go on was the eyes. But yes, I was sure it was Gerry.

There was evidence of a short, greying beard sticking out from around the mask. I’d seen Gerry unkempt and unshaven many times, but never actually with a beard.  But hey, it’s lockdown, maybe he just hasn’t bothered. And it’s been several months since I’d seen him.

He walked past me, oblivious to my staring, his eyes focussed on something at the far end.

In the next aisle, we met up again and this time he looked directly at me as we passed each other.  It was definitely him, but he didn’t acknowledge me at all and just walked past.

I too was wearing a mask (obviously) and have just had a pretty short haircut, so it’s possible he didn’t recognise me.

But, now I was sure: it was definitely him.

And I didn’t want him going home and saying to his missus “I think saw Masher in the supermarket but he completely ignored me”. So, I swung my trolley round and headed toward him.

“Hi Gerry”, I said, startling him slightly as he picked up a pack of sausages, “How’s it going?”

He turned, and in the gap between his mask and his cap, a pair of uncomprehending and slightly concerned-looking eyes stared back at me.

There was a pause.

“Sorry, it’s just that you look like someone I know… the cap.. the eyes…” I said, waving my fingers in front of my own.

He still looked a little concerned at being accosted in this way and so I smiled at him to try and lighten it.

I smiled at him behind my mask.  Pointless.

“Sorry”, I repeated and moved away.

I continued on my shopping perambulations, but I bumped into Simon in every single aisle for the rest of the shop.

Neither of us acknowledged the other.

Going out, Me me me, People