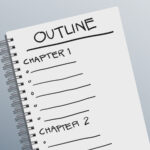 Which is a bloody long time to read a book.

I think that was one of Billy Connelly’s.

I’ve always enjoyed writing, despite not being particularly good at it.

In my younger years, I penned many short stories; essays, small comedy sketches and – during one particularly romantic phase – a remarkable amount of poetry (something I’ve not done since).

I even signed up to a creative writing course at one point, to try and better my prose, but didn’t have the staying power to see it through.

In those early days, I dreamt – like so many, of course – of churning out the next big hit: an Adrian Mole or a Jack Reacher, but found I lacked the imagination and creativity required.

I did have one good idea… for a children’s story. It came to me one day, whilst I was laying under a palm tree in Brazil.

I wrote seven chapters and then lost interest.  I looked at it again a few years ago, having found a copy on some sloppy disks at the back of a shelf and was initially invigorated to have a go at finishing it, but when I read it through, I realised that whilst the idea was still sound, it really needed an almost complete re-write.  My interest waned quickly and it was shelved again.

Maybe one day.  When I have more time.

And time is something I seem to lack: too many other interests and hobbies.

And the telly, of course.

Nowadays, my writing consists of just this sparsely written  blog and my Christmas newsletter.

That’s why I started this Blogathon thingy: to have something to push me into writing… something. Anything.

I think I have been doing this for about fifteen years now and for a large chunk of that I have been joined by our Welsh correspondent, Mr Jones and our ambassador to  France, Dave.  And I thank them both for keeping me company throughout the month.

But this year, it seems Mr Jones has been on a recruitment drive and has managed to talk two other pundits into taking up the challenge.