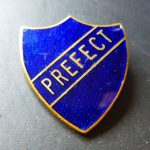 I was on a video call for work earlier this week – no change there, as that is currently the new normal… and all these video calls seem to have ushered in a new phrase for 2020: “Sorry, I was on mute”. I’m sure that will be added into the OED book of new sayings. If there is one.

Anyway, I was on a video call and Harry came home from school and headed straight up to my room, to excitedly show me that he had been made a Prefect.  He proudly pointed to the badge pinned to his jumper as proof… oblivious that I was on a call, despite the fact I was wearing my headset.  To be fair, I have the headset on for much of the day anyway, as I often forget to take it off.

“Yes, very good. Well done”, I said, shooing him away as cries of  “Aww, bless him” resounded in my headphones.

In another call the following day – by way of a laugh – several people appeared on the screen, all wearing their Prefect badges  from school. Not so difficult as you might imagine, as many of them are only in their twenties.

Joining in the fun, it took me only a couple of minutes to produce my own Prefect badge… from 1975. That’s it in the picture above. Gawd knows why I’ve kept it, but I knew exactly where it was: it has been bashing around in my toolbox for the past 40 or so years, which would explain why it’s not as pristine as it once was.

And it’s older than most of the people I work with.

Comparing it to Harry’s one, they don’t seem to have changed much over the years – his one bears a web address on the back, but other than that, they are almost identical.

I pinned it to my polo shirt and in a stern voice I  explained to everyone on the call that as I was the oldest, I must obviously be the Head Prefect and therefore they had all bloody well better listen to me, and do as I bloody well tell them, or else they will bloody well be made to stay behind after.

There were many confused faces in front of me.

Family, Me me me, People, Work