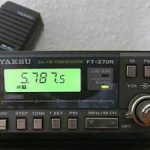 I was gifted a lovely little radio a while back – a Yaesu FT-270R.

It’s an old 2m model, dating back to the late eighties, I’m guessing.  As such, it lacks CTCSS capability, which limits its use somewhat.

However, there is a space inside to fit a FTS-8 subtone encoder board. And so I thought I’d fit one of these and give it a new lease of life.

Sadly though, the FTS-8 board is no longer available and secondhand ones command a hefty price tag.

What to do? Well, make one of course!

I found an elegant design on the web and built it onto a piece of veroboard. Plugging it into the radio, changed some of the available functions, so the radio obviously detected the board.

It allowed me to choose the subtone from the front panel. Excellent.

But it didn’t work.  Checking  the output with my scope, the tone just wasn’t there… or rather, it wasn’t what it should have been.

I spent ages fiddling with it, but ultimately could find nothing wrong.

And so I passed it onto Dave, who – being a clever bugger – worked out pretty quickly that the board I had built actually worked perfectly. Unfortunately, the radio didn’t. It was giving out the wrong signals to the board. 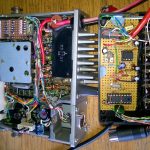 This wasn’t something that could be easily fixed – possibly a microprocessor issue. And so, I figured a workaround, that would allow the tone to be selected manually, using a combination of switches to produce the binary equivalent of the hexadecimal value that the board was looking for in the tone lookup table.

This worked perfectly and when I tested it, I was successfully able to open several different repeaters, all using different subtones.

And then I found a bug, where the tone would only change after five minutes and not whenever the PTT was keyed.  This looked to be a fault with the MCLR on the PIC… possibly damaged by putting in 7.6 volts from the radio (datasheet states that Vpp shouldn’t exceed Vcc). Not having another chip available, I made a slight mod and fitted a miniature relay, which only allowed the board to be powered when the PTT was depressed.  This seemed to work nicely and I was able to switch tones easily and on-the-fly.

So, I put a call out on a repeater. “Your audio is awful!”, I was told.   I replaced the mic ( a new one from ebay cost fifty quid! Yes, fifty quid for a 30 yr old mic!) with an old YM-47 from an FT-290 and it worked perfectly… once I had figured out the differing wiring scheme. 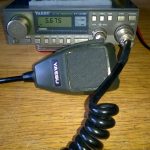 And so, after many weeks of working on it, on and off, it is ready to be put to use.

Not that I need another radio at the moment, so a friend is going to borrow it.

Many times I nearly gave up on it and was going to throw it away. But, I had invested a lot of time and a reasonable amount of money on it and so I wanted to see it through.