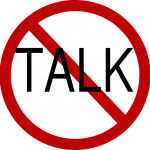 I looked around me and counted.

There were ten of us… that I could see.

And I was the only one who wasn’t staring intently at my phone.

Six of the ten were wearing earphones of some sort, wired and wireless, listening to music or whatever.

I wasn’t one of them.

No-one was speaking… not even the the young man and woman who were seated next to each other and were quite obviously a couple. They just stared at their phones.

We travelled in complete silence, save for the gentle rumbling of the wheels on the tracks and the automated female voice telling us that the next station would be Maidenhead.

I find it a strange irony, that the mobile telephone has killed the art of conversation.