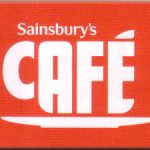 Saturday morning is when I do my grocery shopping up at our local Sainsbury’s (other retail giants are available).

It’s not a task I particularly dislike – packing it all away in the cupboards when I get home, is the bit that I hate doing – but often, before I even start the shop, I’ll take trip upstairs to the café, for a mug of tea and a toasted teacake. I think I’ve mentioned it here before. It’s my little treat.

What annoys me in this particular scenario though, is waiting in the queue. Waiting whilst people order their ridiculous coffees. I’ve definitely mentioned THAT before.

It’s reached the point where I won’t bother if I see more than two people in the queue: that’s a potential six minutes wait!

Today, there were 4 people in the queue, but I got in line anyway, because I just really, really wanted my Saturday morning repast.

The two people directly in front of me were together – a young couple – and they were talking incessantly about how great the previous night had been and how they’d never seen Simon as pissed as that before. Simon’s girlfriend had called an Uber for the two of them, but the driver wouldn’t take Simon because he was so drunk that he might have spewed up in the back of the car.

They jabbered on and on and then they reached the front of the queue.  “At last”, I thought.

“What can I get you?”, asked Here To Help Sally, resplendent in her orange and purple uniform that looked like it hadn’t seen a washing machine for several months.

The two of them looked up at the two large TV screens on the wall behind Sally.

The two large TV screens that they had been nattering in front of for the past ten minutes.

“Really? Do you think you can handle one of them?”

“I don’t know. Maybe I should just have beans on toast.. What do you think?”

“How about an omelette?”