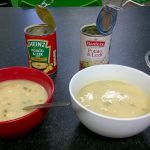 When I do my weekly food shop, I will usually buy a tin or two of soup.

It’s a quick and easy lunch to make in the kitchen downstairs when I am at work: one min in the microwave on full power; take out and stir; in for another minute; eat with a slice of bread. Job done.

And there is such a variety too. I’m not sure I’ve found a soup yet that I don’t like, although I’ll steer clear of any seafood based ones, because me and seafood have never really got on.

So, when confronted with the huge range on the shelves, what do I buy?

Well, generally I’ll go with whatever is on offer.

So, I was in two-minds on Saturday, when I picked up a tin of Baxter’s Leek & Potato – the red discount label catching my eye and telling me that it was reduced by 30p.  This brought in into the same price bracket as a tin of Heinz.  Received wisdom tells us that the more expensive a product is, the better will be its quality.  So, would I prefer the tin of Baxter’s over the tin of Heinz?  Only one way to find out.

I bought both, and yesterday I heated them both to the same temperature and sampled them.  A couple of other people seated around the table and intrigued by what I was doing, also tried both.

The tin of Heinz definitely had more leeks in it… and lumps of potato and was more filling.  It got my vote and that of one of the other tasters.

The final vote went to the Baxter’s, with the taster preferring the texture and the aroma.

So, there you have it: Heinz wins by two votes to one.

Masher.tv – testing soups, so you don’t have to.

Me me me, Misc, Work