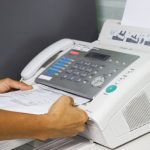 One of the young millennials at work approached me yesterday and asked “What’s a fax?”

I was somewhat surprised that she didn’t know, but then realised that this was such an old, outdated technology, that it was very likely she would never have seen one before, never mind actually used one.  I explained what it was/is and she went away… probably not much the wiser.

But it got me to thinking about methods of communication.

In the early eighties, I spent a month travelling in California and I wanted to let my parents know that all was well. It was expensive to make international calls back then and sending a letter could take several weeks. So, I sent a Telegram.

Yes: a telegram. Remember them? I think I still have it, somewhere.

But, of course, telegrams were phased out a few years back and can no longer be sent.

And what about the humble letter? No-one sits down and writes actual letters anymore, do they?   The speed and convenience of email saw to that.

But even email is being pushed out of favour, as the immediate accessibility of today’s Twitters and  Instafaces persuades people to communicate so much more with each other.

But also actually saying so much less.