All fiction, no Science 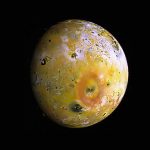 I’ve long been a fan of Science Fiction and if I see a new sci-fi film advertised, I’ll often make a point of going to see it.

I recently saw a film called Io, advertised on Netflix.  Being one of the two  moons of Jupiter that it has been suggested could support life (Europa being the other, of course), my ears pricked up immediately and so I read the synopsis and thought it worth a shot. So, Mrs Masher and I sat down with a beer and pizza in the week, and we watched it.

It was absolute rubbish.

Nothing to do with Io at all! It was about a young woman who stayed behind on a dying earth whilst everyone else buggered off to colonise the titular Jovian satellite. It was tediously slow and had a rubbish ending that left more questions than answers. If you get a chance to catch this on Netflix, I can highly recommend… that you don’t bother.

Similarly, we have just finished watching The First. This was an 8-parter shown on Channel 4 last year and has been sitting on the TiVo, just waiting for the right time to watch it.  Billed as the story about the first manned mission to Mars, I had high hopes that it would be an enjoyable series with lots of serious sci-fi in it.

It too was rubbish.

It was actually more about the personal problems of the crew in the build up to the launch, rather than any actual science.  The actual launch happened in the last episode and we see them starting on their journey… and then it ends.  Nothing about the danger and drama of actually landing on Mars and what they might find and how will they get back. None of that.

It was just Sean Penn showing off his muscles whilst he deals with his messed up daughter.

And what was the bit with the telephone guy? I didn’t get that at all.

There you go: I watch this rubbish so that you don’t have to!