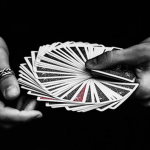 I met up with some people from work yesterday, in Reading, and we went on a bit of a pub crawl.

I’m not sure how many pubs we visited (I think it was six, maybe), but by the end of the night, it’s safe to say that I was pretty well pissed.

To be honest, I can’t really remember how I found my way back to my hotel room.

And I stopped off on the way, to get a burger and chips… by the looks of the detritus in my room this morning.

But one thing I do remember from last night, is magic.

Those of you who read this drivel, will be well aware that I have been a follower of magic and illusions for many, many years. Since I was a teenager, really.

And when I say I follow magic, I don’t just mean that I watch it on the telly. I have learnt how to do several tricks; I have become adept at one or two sleights of hand and I have practiced and practiced until I have got it right.

For years, I have performed a few card tricks and the like, for family and close friends, but I’ve never had the bottle to perform in front of others… in case I make a mess of it or give the game away.

Last night, was a turning point.

At various points throughout the evening, I produced a deck of cards and a couple of other props and performed several tricks in front of about eight or nine people from work.

It all went very well.

Apart from the one I fucked up, right at the end.

Mental note to self: after your seventh pint, Masher, put the cards away!