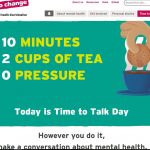 If you didn’t already know, yesterday was national Time To Talk day.

At work, cakes and doughnuts were supplied in the canteen and people were encouraged to come along and chat.

Of course, most people just came along for the confectionary, but several did take the time to discuss their problems with a Mental First Aider.

I just went for a doughnut and a cup of tea.

And then a slice of fruitcake – not very apt for a forum discussing mental issues, I thought.

But all in all, the event seemed well attended and my little counter box with the blue buttons was put into play for the first time and showed that 75% of those who attended, felt it was a worthwhile exercise.

Me me me, People, Work