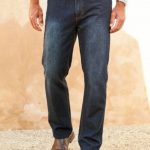 As both of you know, I’ve long been a trendsetter when it comes to fashion.

Back in the eighties, my “Frankie’s Gone To Cricklewood” t-shirt was the talk of the canteen at work and my reputation for only wearing underwear from Bloomingdale’s has become the stuff of folklore.

And when plum-coloured, velvet frock-coats with four-inch lapels and 15-denier Harris tweed cuffs come back into fashion…

However, one fashion that I have never followed is that of denim jeans.

I wear denim jeans – of course – but I’m really not bothered about what make they are.

In fact, the pair of jeans that I normally grab out of the wardrobe, are Sainsbury’s own brand, that I bought in an emergency in Torquay, for six quid a few years ago.  I have worn them many times and not had one single person comment that they look cheap or crap.

Levi Jeans are the premium brand, of course, and lots of youngsters throw their hard-earned cash that way. At eighty-five quid a pair though, I’m sure they can’t afford to buy too many pairs.

The ones that astound me though, are the Levis with buttons on the fly rather than a zip. What’s that backward step all about? Because, from what I’ve seen, to have a wee, you have to undo your belt and waist button first, in order to undo the fly buttons. I’ve stood next to many a chap at the urinal, who has had to stand legs akimbo whilst taking a pee, in order to stop his trousers from falling to the floor. Indeed, only a couple of hours ago, whilst visiting the toilet at the cinema (took the kids to see Incredibles 2), I turned round to see a chap standing at the urinal, with his Levi jeans around his ankles. Then, as I washed my hands, I watched in fascination as he pulled his trousers up and went through all the rigmarole of doing up the fiddly buttons. Then – having got his trousers done up again – he wiggled them down, such that three to four-inches of his underpants were showing.

He walked out with a confident swagger… although, with his crotch around his knees, it looked more like a waddle and it left me thinking that fashion was so much more sensible back in the day, wasn’t it?

Now, where did I put that RELAX tee-shirt…

Me me me, People, Rants