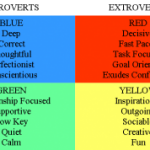 I recently did a personality test at work: the – apparently, very well-known and respected –four colour test.

Although everyone was doing it, I resisted it for a long time… because I’m a Taurus and, of course, we don’t believe in such mumbo jumbo.

But, the boss wanted the whole team to do it, and so I fell in line and completed the questionnaire.

The results put me firmly into the blue square, meaning broadly, that I am a Thinker and an Introvert. I’m task driven.

Fair enough. Sums me up fairly well, I think.

But then we dug into it a bit deeper and I hate to admit it, but I would say it got most of my character traits and key drivers correct – although I won’t go into them here.

Interestingly, most of the rest of the team were in the yellow square: Feeling and Extrovert. People driven.

Apparently, being diametrically opposite the blue square, the Yellows are my nemesis! Nemisi? Nemissesesses.

So, that should make for an interesting team dynamic!

Me me me, Work