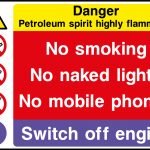 Yesterday, I twice saw mobile phones being used where they shouldn’t be.

The first was yesterday morning, when I was filling the car up with diesel. The chap at the pump in front of me was filling his white BMW X5. At the same time, he was talking on his mobile phone.

There are signs all over the forecourt saying that mobile phones should not be used. And he knew this. This wasn’t ignorance in his part, because he was doing it surreptitiously. With his back toward the attendant at the till, he was filling his car up with one hand, whilst the other held his phone hidden under his open jacket as he talked into it.

I finished what I was doing and drove off. As I passed slowly by him, I gave him a withering look. He looked up at me. “Really?” I said, shaking my head. He did nothing and just went back to his conversation.

Now, I know that operating a mobile phone in a petrol station, is unlikely to cause an explosion. In fact, I believe the main reason that phones should not be operated in that environment, is in case it is dropped and the battery becomes dislodged as it hits the ground, possibly causing a small spark. Again, it’s unlikely that anything would happen if that did occur. Unless there happened to be some spilled petrol on the floor, maybe.  So, the odds are low, but, should the right circumstances come together, the results could be quite catastrophic. Hence why you should NOT use your phone in a petrol station forecourt.

Even if you do own a BMW.

The second instance where I didn’t expect to see a mobile phone being used, was last night, when Mrs Masher and I went to the cinema in Hemel.  A homeless man was laid out in his tatty sleeping bag on the floor outside. Bits of detritus surrounded him:  pizza boxes; paper coffee cups and an upturned flat-cap with some loose change in it, all donated by kindly passers-by.

But, from the angle that Mrs M and I approached him, I could see that he was surreptitiously (again) holding a mobile phone inside his sleeping bag and was was busy texting someone.

I read somewhere that you shouldn’t give money to people sleeping rough, as they are most likely just going to just spend it all on drugs. I don’t know whether that’s true, but I didn’t give him any money as I didn’t want to contribute to his data plan.