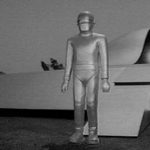 I took the mutt out for her evening drag, last night.

It had just got dark. In fact, with no cloud cover and a half-moon, it was very dark indeed.

We took a common walk through the park and alongside the woods.

I carry a small laser pen with me when I walk Saber at night, as she likes to chase the bright red dot up and down the path. Easy exercising for me!

As we walked along the unlit path, heading toward the woods, I noticed three others walking along another path, that intersected with ours. They were easy to spot, as they each carried a torch and were talking loudly and excitedly.

I quickly realised that we were on a collision course and would meet at the intersection at the same time… which I didn’t want, as I’d have to put the dog back on her leash.

I could walk a bit quicker and get in front of them… but then they would be close behind us. Again, I didn’t want that as they would be a distraction and Saber and I like to walk along in peace and quiet.

And so, I decided to let them get in front so that we drop back a reasonable distance.

Saber and I came off the path and walked up to the treeline of the woods, where I stopped and waited for them to pass by. As I said, it was very dark and I was wearing dark clothing, so they wouldn’t even know I was there.

I stood and waited as they made their way up the path, swinging their torches as they went. Two small beams lower down and a very bright one higher up, had me guessing that it was an adult with two children, It wasn’t long before they were in earshot and I was proved right: a mother and her two kids, all out playing with their shiny new torches.

I stood stock-still in the shadows; my hands pulled up into my coat sleeves and my shoulders hunched against the cold. “Just bloody hurry up, willya”, I muttered.

They stopped and started swinging their torches again. The very bright one, from the adult, made its way along the treeline and dazzled me slightly as it passed. And then it swung back and centred on me.  I’d been spotted.

I stood there motionless, muttering quietly under my breath: “Oh, just fuck off will you. Go away”.  The light stayed on me for about thirty seconds, but I couldn’t quite hear what was being said as they had lowered their voices. I doubted they could see the dog, as she was a few feet behind me, sniffing in the bushes.

Eventually the light swung away and they moved on.  I waited a minute before following, but when I got back on the path, there was no sign of them.

Saber and I continued our walk along the path and when we reached the end, where it joined the road, I put her back on the leash.

We turned left and walked along the pavement.  A police car rounded the corner at speed and headed toward me. He slowed right down and looked at me intensely. I looked straight back at him and smiled. He sped up again and continued down the road.

Hold on! Had I just been reported to the police?

Had Bright-torch phoned them and reported a dark-clad and ominous looking figure lurking in the trees?

I realised that to them, I probably looked a bit menacing, just standing there… rather like Gort from the film The Day The Earth Stood Still.

Maybe I should have got my laser pen out and really acted the part.

Going out, Me me me, People