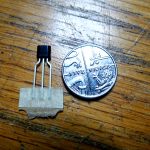 I am in the process of building one of my electronic gizmos.

For this particular project, I need a transistor. But not just any old transistor… I’ve got plenty of those.  No, for this I needed a ZXTP2012ASTZ.

As I’m sure you have realised, this transistor is a little bit out of the ordinary and, as such, none of my normal suppliers stocked it.

I eventually found it on Mouser. They’re a major supplier of electronic components, but I’ve never used them before.

I added the transistor to My Basket and clicked Checkout.

Mouser presented me with a price for my purchase: 59p.

Fifty-nine pence. That’s alright. But then they added another £12.00 for postage!

How the hell can something of that size warrant 12 quid postage?

For those of you not sure how big a transistor is, that it should justify 12 quid postage, I have included a picture… with a 5p coin for scale.

Turns out, Mouser have a standard 12 quid P&P added to any order under 33 pounds.

No matter what it is.

Obviously, I didn’t buy it.

But then, I mentioned this to a chap I talk to regularly on the radio.  Jim said that he often ordered stuff from Mouser and would be happy to add my transistor to his next order. What a top fellow!

I received an email from him yesterday, telling me it had arrived.

As he only lives ten miles from me, I took a drive over and we had a good ol’ chat over a cup of tea and a biscuit.

It was good to finally put a face to the voice I’ve spoken to, so many times over the past couple of years.

And he never even charged me for the transistor.