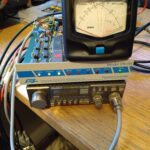 Whilst rummaging about up in the loft the other day, looking for… I can’t remember what, I stumbled upon my old AEA PK-88 Packet TNC.

You remember them, right?

All the big boys were running PK-232 units, but they were too costly for me. The cheaperPK-88 served it’s purpose well, though.

Back in the late 80’s, I’d gotten very interested in the X.25 protocol used to send data packets around a telecoms network and so, when some bright spark developed a version that could be used in amateur radio in the early 90’s – AX.25 – I of course decided to get involved.

Back then, packet communications was all the rage and hundreds of us set up nodes and digipeaters at home, forming a radio mesh that allowed packets to travel up and down the country, in much the same way as companies like BT were doing.  Our packets tended to be just routine messages (like an email), rather than the commercial data that travelled over X.25. Of course, our amateur network lacked the millions of pounds that the telecoms companies were able to pour into it: it was slower and prone to failure… but it was fun and we learnt a lot about network routing.  Looking back at it now, I realise just how much I have forgotten, over the years.

But anyway…  amateur packet was pretty much killed off by the internet and so I wondered what I could use my old TNC for.

Not much, according to Google.

But, a version of amateur packet is still alive, in the form of the Automatic Packet Reporting System.   Unlike the old system, APRS tends to be more localised, with guys broadcasting beacons, detailing 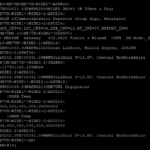 local weather and shit like that.  All a bit pointless, but I wondered whether I would be able to use my ancient TNC to pick up APRS packets and decode them.

And so, after much fiddling about with RS232 cables and PuTTY and a bit of soldering, I was rewarded with the picture on the right.  Success!!

I am pretty chuffed at having figured out how to get it to decode the packets, after nearly thirty years.

Next step is to see if I can actually transmit any.

Watch this space… if you can be arsed.