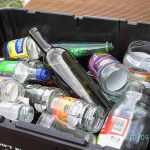 It’s been several months since they were last done, but today our glass recycling boxes are being emptied. Yay!

The sense of excitement in the street is palpable.

Our glass box filled to overflowing a long time back, and so we put all the bottles in carrier bags and took them to our local recycling site, up at the supermarket.  Unfortunately, the skip was already completely full, so we had to leave them by the side in carrier bags… along with about a thousand others!

And now the box is full again, so much so, that I have had to transfer some into another box as it was getting too heavy to lift.

But it doesn’t matter, because – as I said – the council have started glass collections once again.

And I realised – as I was walking the dog this morning and nosing at what types of glass people have put in their collection boxes – it’s possible (to some degree) to tell a person’s personality, from what they throw away and how they dispose of it.

Take the people at number 34 in the next road. They have three glass collection boxes sitting outside, with the glass all sorted into clear, green and brown. They are obviously very meticulous about things.  I would say that they are probably late risers too – possibly retired – as they must never have seen the glass being collected. If they had, they would know that there is no point in separating it, because it all ends up being thrown together into the back of the bin lorry.

The couple across the road from us have the bottles in their crate all neatly stood up in rows, with other bottles placed neck down in the spaces, to optimise space.  Unsurprisingly, they are both accountants and probably have an eye for efficiency.

The collection box at the house round the corner, is almost exclusively filled with Bovril jars.  Not sure what that says about them, other than the fact they obviously enjoy a beefy bedtime drink.

And, just a few doors away there is a collection box with nothing but empty, fancy wine bottles in it, which – when compared to our own box, which is predominantly full of various beer bottles and empty Dolmio jars – makes me think that they probably have an air of sophistication about them.

Or  – as I actually know them to be – maybe they are just a couple of piss-heads with more money than us.