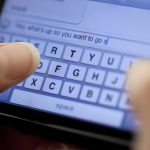 I was sitting downstairs in the kitchen area at work the other day, having my lunch, when I noticed the young chap sitting next to me, texting on his phone.

His two thumbs flew over the tiny touchscreen keyboard faster than I could follow.

“That’s amazing”, I said.  As someone who is a pretty slow, two-fingered, typist on a proper keyboard and is so much slower on a phone keyboard, I was most impressed with the speed at which he was bashing out this text. “Do you make many mistakes typing at that speed?” I asked.

“Not really”, he said, turning his head to look at me, “Auto-correct will pick up any mistakes I make, but usually I’m fairly accurate”.

He’d continued typing whilst looking and talking to me. I looked at the message he had been tapping out to his girlfriend.

Perfect. Not a mistake to be seen. It’s fair to say I was a little in awe.

It has taken me twenty minutes to type this out.

I reckon he could have done it in two.