Let there be light… after a short while 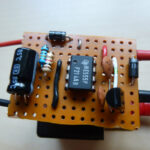 A few weeks back, half a dozen of us took a ride up to a café, on the A10, near Royston.

It’s a popular haunt for biker’s and – on a sunny Sunday morning – it was pretty busy, even with the Covid restrictions meaning that we all had to eat outside on the limited number of benches available.

Except that we didn’t. Because my bike refused to start.

I had to suffer the ignomy of being pushed, in order to do a bump start, in front of dozens of fellow bikers.

This is only the second time this has happened in the nine years I have owned the bike, but even still…

Doing some research into this problem, I learned that it’s a well-known (not to me it wasn’t!) issue, within the Triumph Bonneville community, which is generally referred to as “The Dreaded Click”.

One suggestion I found, was to fit a switch on the headlights to save on current draw when starting (I think many modern bikes aren’t fitted with an on/off switch nowadays, as having the headlight on permanently is seen as a safety feature, so they have removed the ability to turn it off). I saw several examples where people had fitted a switch onto the headlight housing.  There was no way, I was going to ruin my beautifully chromed headlight housing, by drilling a hole in it. There is a headlight cut-out relay fitted to most bikes nowadays, for this very reason, but it seems they don’t always work. 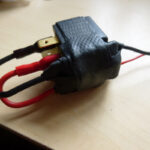 So, instead, I made a small timer board. That’s it in the picture at the top of this post. Wrapped in self-amalgamating tape to keep it dry and also to prevent any shorts against the metalwork, this fits easily inside the headlight housing and keeps the headlights off for about fifteen seconds from when the ignition is switched on. 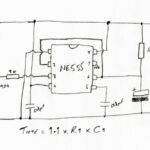 The circuit is simple and I built it onto a small scrap of stripboard that I had lying around. The rest of the components were from my bits box, apart from the relay. I decided to by an automotive relay as they are water-resistant – a fiver from my local auto parts store. Also, they can handle higher current than the piddly little relays I have to hand – I measured the headlight current draw at 4A.

The positive connection to the headlight main beam was cut and put in series with the normally closed contacts on the relay. I decided to do it that way, so that the headlight would have power, should the circuit fail for any reason. 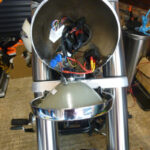 Power for the circuit was taken from the sidelight, using a couple of Scotchlok connectors to tap into the wiring.

Total cost?  Well, I had most of the parts, but I reckon about six quid.

On a ride up to Jack’s Hill last Sunday, it worked perfectly.

I thought I’d post the idea here for anyone else having the same issue.

Of course, I can’t be held responsible if you bodge it and blow all the fuses on your bike!