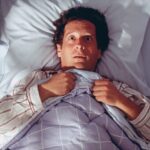 I opened my eyes and looked at the alarm clock on the bedside table: 03:10

I got out of bed and sleepily staggered out onto the landing.

Naked and shivering from the cold, I waited for the noise again.  It seemed to take an age.

Ahh, OK, it’s the one downstairs.

Still naked and still shivering, I wandered down the stairs and – on tip-toes – reached up, gave the quarter-turn required to take the smoke alarm off of the ceiling. I pulled the battery from the back and slung them both on the sofa.

The dog threw a disinterested look my way, but didn’t even bother to lift her head from where she was laying.

I went back up to bed and spent an hour trying to get back to sleep.

Which is likely why I feel so tired right now.

This isn’t the first – or even, second – time this has happened. For some reason, the smoke alarm batteries always seem to reach their critical failure point in the small hours. Both the upstairs and downstairs ones have done this over the years.

And so, this morning finds me trawling the internet for mains powered ones.

However, I’ve already given up on that idea, as getting mains wiring to the downstairs one would be pretty difficult and would involve taking up the newly-laid bedroom carpet.

For all that bother, I think I’ll just put up with a sleepless night, once in a while.

Smokey and the bandits 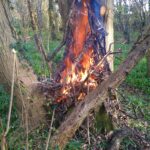 I’ve mentioned several times before, the woods where I often walk the dog.

It’s that time of year where it starts looking good: the trees are starting to get some foliage and the bluebells have just started to shoot up and blossom.  In full bloom, it’s a beautiful sight and makes for a lovely walk.

But yesterday, as the mutt and I made our way round, I heard the cracking of branches.  Peering through the trees, I could see four herberts – all aged about sixteen – breaking  them from the trees. Then as I got closer, I could see that they were throwing them onto a fire that they had made around a tree.

I pushed my way through the undergrowth until I was about four or five meters away and from there  I could see that the tree was well ablaze – surprisingly so, considering the recent rain and snow we’d had.

“Oi! What do you think you are doing?” I shouted at them.  They all had hoods up, making it difficult to see their faces, especially through the smoke that was coming from the tree.

They all looked away from me, so as to hide their faces.  “We’re just having a little fire to keep ourselves warm” said the short one.

“No you’re not!” I exclaimed, “You’re setting fire to that tree, you bloody idiots”.

“We’ll put it out later”, said the short, gobby one. There’s always a gobby one. “We’ve got some bottles of water.”

“A couple of bottles of water are not going to put THAT out!”.   I needed to get rid of them, so I got my phone out. “Right, you just wait there”, I said.

“Fuck off!”  A stick flew past my head and landed in the bush behind me, as they decided to flee before I called the police.

With them out of the way, I started to tackle the blazing tree: the way this fire was raging, there was no doubt in mind that, if left, it would consume the whole tree and possibly several of those around it.

Using a long stick at arms-length, I pulled and pushed apart the tee-pee of sticks they had rather expertly placed around the tree, helping to concentrate the flames at the base.

I beat and stamped the fire out until there was just ash and embers left. A couple of small fires kept self-igniting and I wondered how to stop them.  Having the bladder of a small child, I’ll often stop for a pee as I walk round the woods, but this time, when I really needed it, I just didn’t want to go – not that it would have been enough.

And then I spotted a plastic  2 litre water bottle laying in the grass nearby.  It must have been laying there for sometime, as the water inside had gone green.  No matter: I quickly undid the lid and threw some into the smouldering embers.

I jumped back, as flames shot up into the air.

Petrol!  Of course, that’s how they’d managed to get the fire to take so well.  Little gits!

I spent a few more minutes putting out the fire I had just restarted and then headed home, taking the rest of the petrol with me – I wasn’t going to leave it so that they could come back later and try again.

All my clothes – including my coat – have had to go in the wash, as they stink of smoke.

Now, when I was a lad, me and my mates used to get up to mischief… of course we did, but we never did anything like that.

I might be starting to sound like an old man, but what is it with kids today? 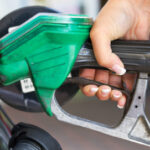 I filled my car up today.

At a petrol station.

That’s a pretty rare event these days, when I work from home and rarely travel out in the car for anything other than the weekly grocery shop – a return journey of less than a mile.

Yes, there have been the occasional trips up to the local DIY store (y’know, that big one owned by the actresses Linda Barron and Pauline Quirk) and also up to the local Tidy Tip (currently the top meeting spot in the area for singles to meet up), but other than that the car just sits on the drive, doing absolutely nothing to warrant it’s overpriced insurance premium.

So, on yesterday’s trip to the supermarket, I was slightly surprised when the fuel warning light came on, warning me that I only had fifty miles left in the tank . Fifty miles! That would probably get me to the end of April, to be fair.  But, I thought I’d fill up anyway, as I don’t like letting it run too low.

And it occurred to me, as I stood there pouring hydrocarbons into the tank, gripping the nozzle and watching the numbers scroll up rapidly, that I honestly could not remember the last time I had done this.

I could not remember the last time I had filled my car up with fuel.

And so, I have just looked back through my bank statements and found that it was November 9th last year.

How ridiculous is that?