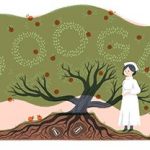 But you both knew that, right?

Because Google told you.

Hardly a day passes, without Google’s homepage telling you that it is the birthday of some obscure person that you’ve never heard of (unless you are one of those that still uses Excite or Alta Vista, of course).

“It’s the 297th birthday of Louis Richaud, the little-known French impressionist painter, who died from syphilis sometime back in the eighteenth century”.

OK, I made that one up, but you get the gist: someone we don’t know or really care about.

But, c’mon Google, you only need to find 366 well known dead people, to do this over the course of a year.

You could always google it, if you get stuck..